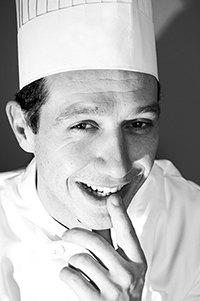 François Deremiens is an autodidact in the world of chocolate. From a passion, from a hobby to the beginning, he made it his job. Over time, he has developed a range off the beaten path that dares to surprise. Pastry, ice cream and finally macaroons have come to expand the range of flavors it offers.

From a small workshop of 18m ² in 2005, the company has expanded to operate on two workshops of about 400 sqm.

The love of the product, the material is the heart of the work of the dozen people around the young chef.

Today, Deremiens chocolates are present in Belgium but also in Japan, the Emirates, Switzerland, France, Spain ... In 2015, he opened his first franchise in Paris.

By dint of work and creativity, he has deepened his place in the Belgian chocolate landscape.

In 2015, the famous Chocolate Crunchers' Guide in Paris dedicates him to one of the 22 best foreign chocolatiers in the world.

He has also been a consultant for Inter-American Development Bank (IDB) and the Multilateral Investment Fund (FOMIN).